Prohibition of Alcohol in Tangerang and Bogor - Indonesia Expat

Prohibition of Alcohol in Tangerang and Bogor - Indonesia Expat

Several regions in Indonesia have tightened the circulation of alcohol in their respective regions by issuing regional regulations that give greater authority to the security forces to crack down on the storage and production of liquor.

Two regions, namely Tangerang and Bogor, satellite cities of Jakarta, already have regional regulations (Perda) relating to the distribution of alcohol. In Bogor Regency, the regulation is listed in Perda no. 4/2015 concerning public order. “Article 17 letter E states that every person or entity is prohibited from storing, producing, and distributing alcoholic drinks without permission from the authorised official. So if there is a permit, it is okay,” said Budi Surono, a member of the Bogor District Public Order Agency (Satpol PP).

Budi said that his team has a mechanism in every action, such as asking for a permit letter from the seller and confirming it with the related agency. “We usually crack down on stalls. While clubs and discotheques usually have permission,” Budi said.

In Bogor City, regulations regarding the circulation of alcoholic drinks are listed in Mayor Regulation no. 74/2015. The regulation allows hotels, restaurants, and bars to sell alcoholic drinks. However, referring to the Mayor Regulation no. 70/2016, there are additional regulations including that alcohol buyers must be at least 21 years old and show an identity card when buying. Also, the distance of the location of the sale of alcohol may not be close to terminals, schools, sports facilities, hospitals, and parks.

In South Tangerang, the prohibition on the distribution and production of alcoholic drinks is regulated in Perda no. 4/2014 concerning the Implementation of Licensing and Registration of Industrial and Trade Businesses. “In article 122 of the Perda, it is clear that the circulation of alcohol in South Tangerang is prohibited,” said Head of Law Enforcement and Legislation Unit of South Tangerang Satpol PP, Oki Rudianto.

South Tangerang Satpol PP is quite intense in conducting surveillance and raids on places that store and sell alcoholic drinks, and one which received the public spotlight was the selling of liquor in a warehouse in the city last June. The warehouse stored various types of premium alcohol, which was distributed to a number of entertainment venues in Jakarta, Bogor, Depok, Tangerang, and Bekasi (Jabodetabek).

The Tangerang region, which includes South Tangerang, Tangerang Regency, and Tangerang City, is believed to be one of the areas that became the centre of production of illegal, homemade alcohol that has circulated in the Greater Jakarta area. The liquor, made from a mixture of hazardous ingredients such as insect repellent and cough medicine, has repeatedly killed many victims.

In April 2018, at least 91 people died because of drinking home-made liquor. The incidents were scattered in several regions including South Tangerang, Jakarta, and several cities in West Java. In April 2018, the same situation also happened to 31 people in Depok, Bekasi, and Jakarta. Alcohol is heavily taxed in Indonesia, making it too expensive for most people, which has prompted a black market for the unlicensed liquor.

Government regulates liquor through Minister of Trade Regulation no. 20/2014 concerning the control and supervision of the procurement, distribution, and sale of alcoholic beverages. Even though national-level regulations already exist, many local governments make and implement their own rules. A study by the Centre for Indonesian Policy Studies (CIPS) in 2018 revealed that there were more than 150 local regulations enacted to limit the distribution and consumption of alcohol.

Public policy observer Agus Pambagio said local government may make rules for their own regions but they should not conflict with regulations at higher levels. “The local regulations must be harmonised with the laws above them,” Agus said.

He said local government usually makes rules because it responds to the people’s aspirations. However, he is concerned that the many rules that are made also open up greater opportunities for fraud by government officials for their personal benefit. In addition, local regulations related to alcohol in the regions might cause fewer foreign tourists to want to pay a visit. “We are faced with choices, we want many tourists to come or not,” Agus stated.

Research by CIPS concludes that government regulations to control the distribution of alcoholic beverages by imposing high import and excise tax rates, as well as many regional regulations aimed at limiting alcohol distribution and consumption, are not effective at protecting consumers.

Two researchers from CIPS, Hizkia Respatiadi and Sugianto Tandra, in their research report entitled Combating Illegal Alcohol: Policy Priorities in Bandung, West Java (2018) argued that these regulations triggered the widespread circulation of unlicensed alcohol. “The black market of illegal alcohol will continue to exist if the government continues to close access and affordability of legal alcohol,” they wrote in their report.

To stop the circulation of unlicensed alcohol as well as to reduce the number of victims, Hizkia and Sugianto encouraged the central government to reduce the price of excise and import duties on legal alcohol. They also encouraged local governments to review alcohol bans in their respective regions. Instead of prohibiting consumption, policies should be focused on increasing education about the dangers of alcohol. Even if they choose to keep drinking, it must be ensured they get access to legal and safer alcoholic drinks.

Besides being known as “the city of rain”, Bogor in West Java is also notorious as the “city of 1 million angkot [public minivan]”, thanks to their ubiquitous presence across the city. However, the municipal administration aims to steer the city in another direction with plans in store to regulate the unwieldy angkot as part of a strategy to improve transportation management.Although not exactly 1 million in number, the Bogor administration has recorded that more than 6,400 angkot roam the streets of the 118.5-square-kilometer city. Not all fall under the administration’s authority as only 2,400 have acquired operating permits from the Bogor administration, with the rest coming from the neighboring Bogor regency.Bogor Mayor Bima Arya Sugiarto recently said that in the first phase of the plan, the city aimed to reduce the number of angkot operating in the city center, particular...

Besides being known as “the city of rain”, Bogor in West Java is also notorious as the “city of 1 million angkot (public minivan)”, thanks to their ubiquitous presence across the city. However, the municipal administration aims to steer the city in another direction with plans in store to regulate the unwieldy angkot as part of a strategy to improve transportation management. Although not exactly 1 million in number, the Bogor administration has recorded that more than 6,400 angkot roam the streets of the 118.5 square kilometer city. Not all fall under the administration’s authority as only 2,400 have acquired operating permits from the Bogor administration, with the rest coming from the neighboring Bogor regency. Bogor Mayor Bima Arya Sugiarto recently said that in the first phase of the plan, the city aimed to reduc... Police in Bogor regency arrested a 17-year-old male who goes by the initials RN over suspicion that he sexually abused a 10-year-old girl.

According to the police, on August 28, RN, who was driving his motorcycle, picked up the victim from the side of the road.

“At around 9am, the culprit met with the victim on the road and asked her for directions. He asked her to hop on and take him there, but he took the victim to Gunung Putri [subdistrict] instead,” Bogor Regency Police Chief Andi Moch Dicky told reporters today, as quoted by Detik.

Dicky added that RN allegedly sexually abused the victim in an abandoned house.

“He forced the victim to perform oral sex on him and threatened to kill her if she refused. After that, the culprit shoved his pointer finger into the victim’s genitalia until she bled. After he was done, the victim managed to escape and ran to a nearby security guard post,” he said.

Police, with the help of locals, managed to identify RN as the young girl’s abductor after he was caught by CCTV cameras picking up the victim. RN was eventually arrested yesterday in a nearby district in Bekasi.

RN was charged with sexual assault under Indonesia’s Child Protection Law. If convicted, he could face up to 15 years in prison. There is so far no indication that RN had any history of sexually abusing minors.

In 2016, Indonesia introduced chemical castration as a possible punishment for child molestation. Recently, a man convicted of raping nine girls became the first to be sentenced with chemical castration, but authorities still have no means to carry out the controversial punishment. 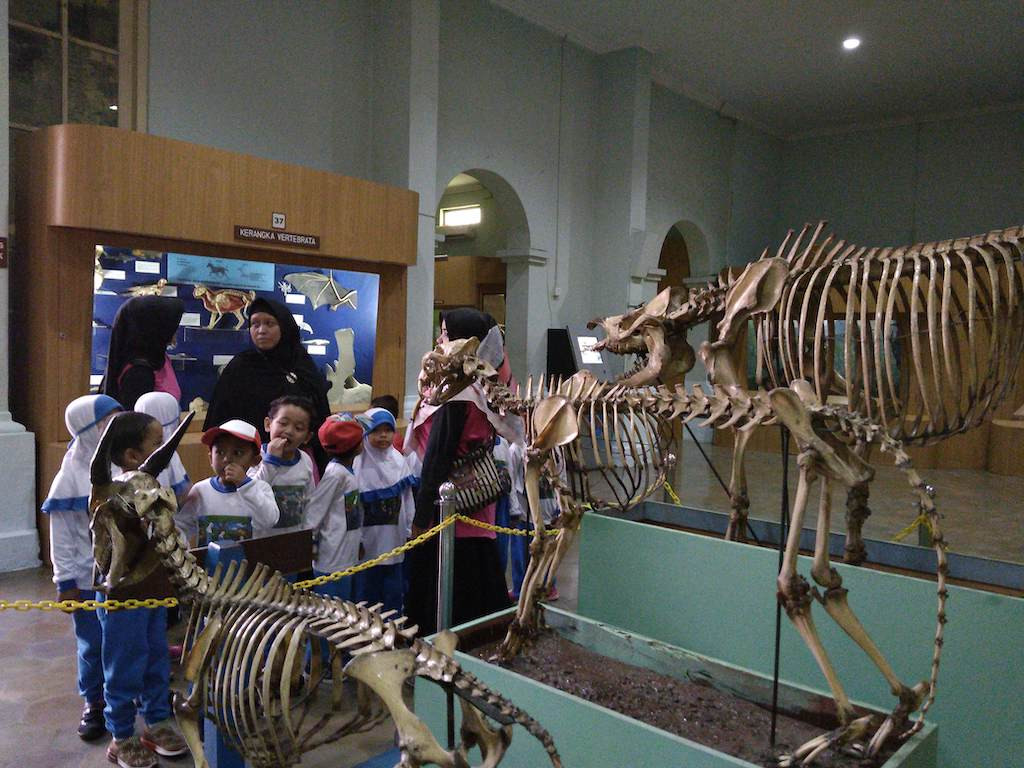 The Bogor Zoology Museum in West Java, home to the largest collection of zoological specimens in Southeast Asia, celebrates its 125th anniversary this year.

The museum – situated within the Bogor Botanical Gardens – was founded in 1894 by Dutch zoologist JC Koningsberger and initially called the Landbouw Zoologish, as a laboratory that mainly conducted research on agricultural pest insects.

Today, the museum boasts a vast collection of specimens that comprise fish, reptiles, amphibians, mammals, insects and invertebrates, among others. It is now regarded as a historical symbol of scientific progress, as well as of the development of research on the diversity of fauna across the archipelago.

According to the Bogor Zoology Museum, a great bulk of the museum’s collection was transferred to the Widyasatwaloka building at the Indonesian Institute of Sciences (LIPI) complex in neighboring Cibinong in 1997. The Widyasatwaloka building, which was officially opened by then vice president Tri Sutrisno at the tail-end of Soeharto’s regime, would go on to become LIPI’s zoology research arm. The Widyasatwaloka is not open to the public. However, students and other academics may still apply to visit.

The majority of the exhibits left at the old Bogor Zoology Museum are replicas. The museum, which opens daily, has seen a steady increase in public attendance, which now averages 1,417 visitors – mostly students – per day. The museum recorded more than 500,000 visitors throughout 2018.

Bogor Zoology Museum head Cahyo Rahmadi said the majority of the museum’s exhibits were moved to the Widyasatwaloka since there was very little space left for new specimens and scientific activities.

He added that the museum had undergone numerous renovations and upgrades to its facilities because most of them had been more than 20 years old. The museum’s current collection consists of 122 exhibits showcasing 954 specimens from across the country, in addition to 3 million scientific samples for research purposes, he added.

Bogor Deputy Mayor Dedie Rachim said the city hosted a bevy of museums around the Botanical Gardens. In addition to the Bogor Zoology Museum, the city is also home to the Soil Museum (owned by the Agricultural Ministry), the Presidential Museum, the Indonesian Museum of Natural History and the Pembela Tanah Air (Peta) Museum.

However, he said the public was still unfamiliar with these museums because of a lack of media exposure. The mayor said he aimed to soon promote scientific tourism in Bogor. (rfa/wng)