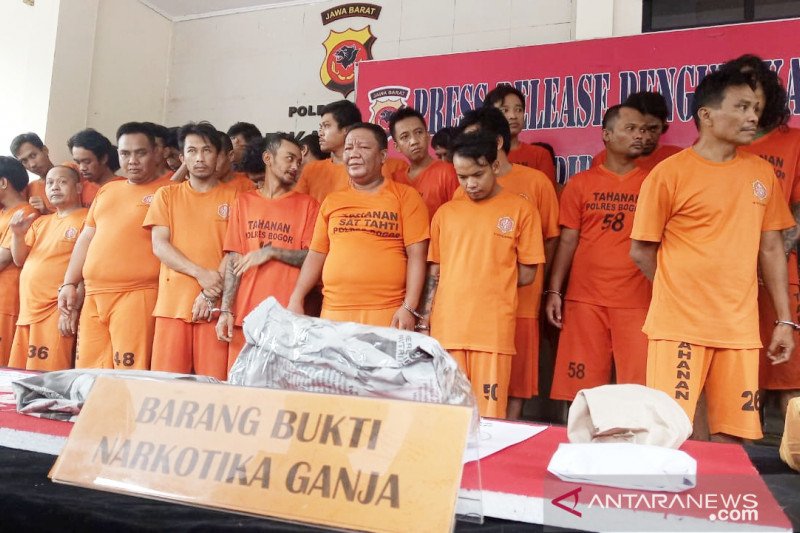 "We successfully uncovered 40 drug cases, with 53 suspects, mostly drug lords and dealers," Bogor District Police Chief Adjunct Sen. Coms. Muhammad Joni stated at an event held on Friday to highlight the success achieved by his staff in the war on drugs.

During the drug raids, 100 grams of crystal methamphetamine or sabu-sabu, a kilogram of marijuana, and several other illicit drugs were confiscated.

"We continue to work on drug cases to catch bigger drug lords," he remarked, adding that youngsters were the prime targets of the drug dealers.

To run their illegal business, the drug traffickers follow a closed system wherein sellers and buyers were unaware of each other’s identities, Joni revealed.

To hoodwink law enforcement agencies and thwart their attempts to track the culprits, the drug transactions are conducted by storing the purchased drug packages at certain locations. The buyers then take the consignments, he explained.

The suspects are charged over violation of articles 114 and 112 of Indonesia's Law Number 35 of 2009 on Narcotics under which they are liable to face a prison term of eight to 15 years.

The sword hangs heavy over Indonesia in the form of drug dealers since several people from its working-age population get siphoned into a vicious circle.

The National Narcotics Agency's report showed that some 50 drug use-related deaths occur in Indonesia. Nonetheless, other drug users in the country remain unfazed by these deaths and continue to consume these banned substances.

Hence, Indonesia is perceived by both domestic and transnational drug dealers as a potential market due to its huge population and millions of drug users. The drug trade in the country is estimated to reach nearly Rp66 trillion.

In response to the illicit drugs that drug kingpins have smuggled into and traded in the country over the past few decades, the Indonesian government continues to apply punitive measures against them.

The convicts were executed by a firing squad at the Tunggal Panaluan shooting range in Nusakambangan Island off Central Java's southern coast at 12:46 a.m. local time on July 29, 2016.