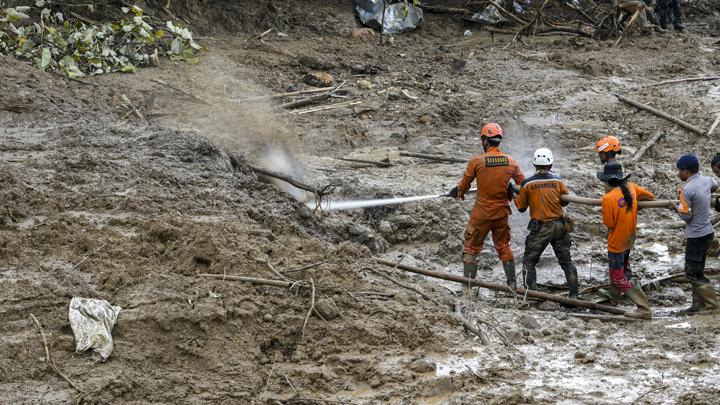 TEMPO.CO, Bogor - The period of searching for the survivors of floods and landslides in Sukajaya, Bogor, was being extended for the next three days. The disaster incident commander of Bogor District, Lt. Col. of Infantry Harry Eko Sutrisno conveyed the information.

Harry stated they had done everything to search for the victims, including deploying the heavy equipment. "The search is being extended for the next three days. Hopefully, there is a good result," he said in the main post of Sukajaya, Thursday, January 9, 2020.

The search, being executed by armed forces (TNI), police, and the Search and Rescue team, was done at some points; starting from the identification of the victims' houses until the suspicious area where the victims might be carried away by the current or landslide material.

Three victims (Amri, 65; Maesaroh, 25; and Cicih, 10) have yet to be found until today. "We'll work hard for the search. Hopefully, the extended time will bring a good result," said Harry.

Yuli, parent of the victim (Cicih) said that she was expecting her daughter to be found even she's dead. Yuli said that Cicih was with her when the landslide occurred about 70 meters from her residence.

"The incident happened on January 1 at 8 in the morning when I was cleaning the house," said Yuli who is now hospitalized in the health center of Sukajaya.

While the daughter of another missing victim (Amri), Amnah, said that her father was the first person who knew about the landslide. Amnah said that Amri was shout out to all the residents to leave their homes and save themselves from the disaster.