'I was under pressure': Protester on trial claims police coerced him during questioning - The Jakarta Post - Jakarta Post

'I was under pressure': Protester on trial claims police coerced him during questioning - The Jakarta Post - Jakarta Post 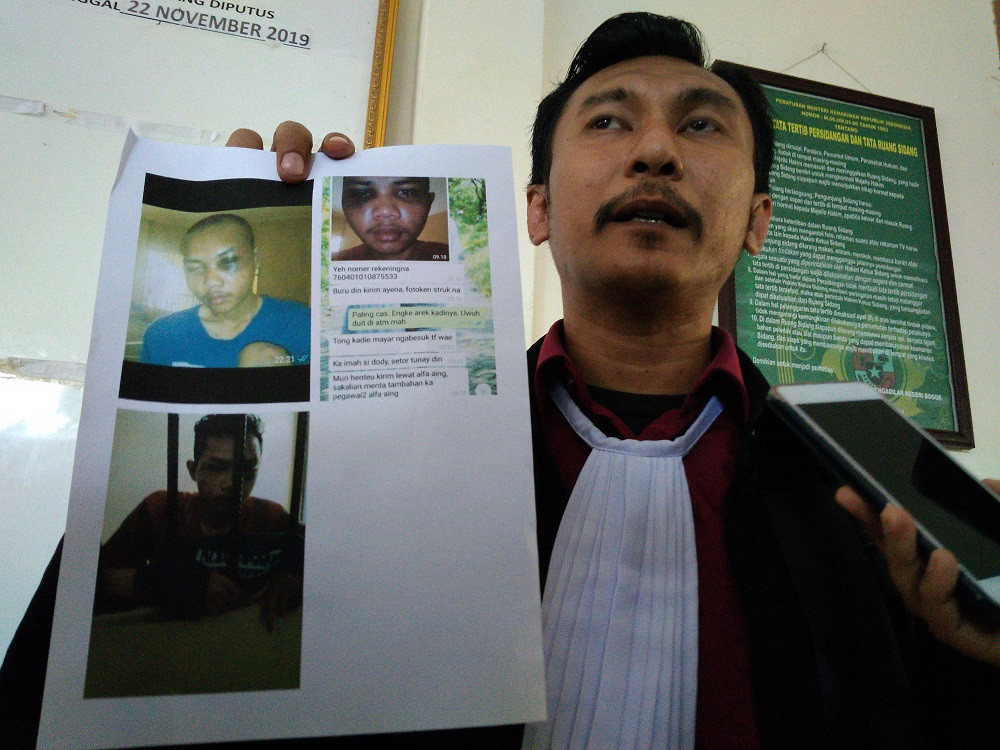 A defendant accused of assaulting a police officer during the September student protests has claimed he was assaulted and coerced into making false testimony during questioning by the police.

Ariyanto, 22, who is currently undergoing trial at the Bogor District Court, told the panel of judges on Monday that he was under pressure from the police while they questioned him for their investigation report.

The trial continued on Monday with presiding judge Friska and judges Arya and Melisa conducting the questioning of Ariyanto, during which his lawyer, Ardin Firanata, provided proof of the alleged assaults against the defendant, including photographs of Ariyanto's bruised face.

The case started when Ariyanto wanted to participate in the large student protests on Sept. 25, 2019, in front of the House of Representatives complex in Central Jakarta.

Ariyanto and some of his peers wanted to go to the capital by using the commuter line trains from Bogor Station in West Java, but they were dispersed by police officers stationed there.

He and his peers then went to Bogor City Hall to stage the protests there instead. Ariyanto testified that during the rally he hit a Bogor City Police officer named Chandra Nelson in response to being bumped by someone from behind, Ardin said.

Ariyanto told the judges that he only hit the police officer once.

“Have you read the police investigation report? It is said there that you hit a police officer twice, which the eyewitnesses said was so,” Friska said during the trial session on Monday.

“I only hit him once. I was under pressure during the making of the police report,” Ariyanto told the court.

Ariyanto said he wanted to join the protests after seeing posts on Facebook calling for people to rally against controversial bills, including the revision to the Criminal Code and the revision of the Corruption Eradication Commission (KPK) Law.

The court is to summon Chandra Nelson, who reported Ariyanto, and other police officers who questioned Ariyanto during the investigation, to testify.

Ariyanto worked as an employee for a convenience store in Bogor, which his family relied on.

Sahata, Ariyanto's father, said that he did not expect that his son was going to be arrested by the police.

“I had [...] forbidden Ariyanto from joining the protests. I wanted him to focus on his job. I only knew Ariyanto was arrested by the police after he did not come home for two days,” Sahata said.

Ariyanto was charged under Article 170 and Article 212 of the Criminal Code for assault against state officials, which upon conviction can result in a five-year prison sentence, seven years if grave wounds were caused and 12 years if the actions resulted in death.

The defendant is not the only person claiming to have been pressured by the police during interrogation after being accused of attacking officers during the September student rallies.

Dede Luthfi Alfiandi, whose picture became an emblem of the student protests after he was photographed clutching an Indonesian flag to his face, also told the judges at the Central Jakarta District Court that he was tortured by police officers to falsely confess to having attacked authorities.

He was accused of violating articles 212 and 218 of the Criminal Code for resisting officers’ orders more than three times.

According to the prosecutors, Luthfi and the other student protesters were asked to disperse but resisted and instead attacked the police officers by throwing stones.

Luthfi was also charged under Article 170 of the Code for allegedly taking part in destroying public facilities. (ami)