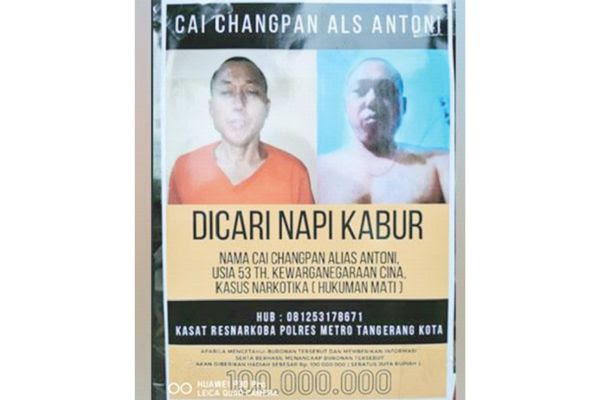 JAKARTA: Death row inmate, Cai Changpan (pic), who fled the Tangerang Penitentiary was found lifeless at Jasinga Forest in Bogor, West Java.“We found him dead from hanging himself. We’re taking the body to Kramatjati Police Hospital for an autopsy,” said Jakarta Metro police chief of public relations, Sr. Commissioner Yusri Yunus on Saturday,.Yusri explained that the Chinese national was found in a tire-burning plant in Jasinga Forest.
The authorities received initial information from the security officer at the plant. “Based on the information from the security, he (Cai Changpan) often stay the nights there, but not every day,” he said.Cai escaped from the Class 1 Tangerang Penitentiary on Monday, Sept. 14 at 2.30am. He fled through a hole he dug by using a small scope, screwdriver, and chisel for eight months. The hole, measuring 30-metre-long and 2-metre-deep, went through the culvert outside the prison.
The wardens only found out that their prisoner ran away 11 hours after the incident. The authorities named two wardens, S and S, as the suspects who helped the drug convict to escape.